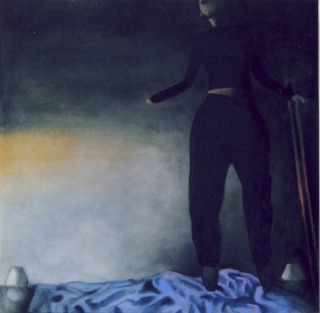 When I do venture back into Oils it doesn’t always work but there is something rich and succulent about working in this media. My paintings work best when I begin with an idea rather than an image. The painting evolves on the surface and I push the paint around to come to a conclusion that satisfies me (as much as this is possible).
When I was a little girl there was a period of time when a friend and I believed we were witches. We would watch the film ‘Bedknobs and Broomsticks’ over and over and I would sit in my Grandmother’s kitchen in the dark and endeavour to take off on her kitchen broom. We inhabited this idea completely for what seemed like an age, talking about our coven’s secret meetings in the woods and how we had flown across the rooftops at midnight. It seems funny now but I do believe there is something inherently powerful and magical in femininity and indeed in the creative process of woman themselves. Sometimes when I paint I feel like I am mixing a potion or invoking an incantation. Now I have a daughter of my own I feel that link with her even more powerfully.
Witchcraft has been portrayed negatively throughout the ages as has the idea of the hysteria surrounding it. For myself could there be a more terrifying portrayal of man or woman than Abigail Williams in Arthur Miller’s ‘The Crucible’.
This image is again one of ambiguity, I love the idea of levitation and have used in various ways in my work. The image is dark, something I try not to fall into but I do love dark paintings, Carravaggio, Rembrandt and  De la Tour.